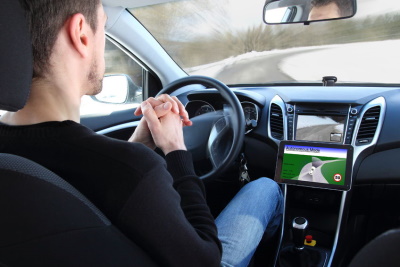 Once simply a scene from something like “The Jetsons” self-driving cars seemed, frankly, unrealistic. Fast forward to 2016 and self-driving cars are no longer a futuristic fantasy. According to Business Insider, an estimated 10 million cars with self-driving features will be on the roads by 2020. Google is already testing these vehicles in California.

With the addition of self-driving cars, does this mean the end of vehicle insurance as we know it? It may seem that for as long as we have cars we’ll need a means to insure them. But pause to consider that 90 percent of all traffic accidents are the result of human error, according to the International Organization for Road Accident Prevention.

That means things like driving under the influence, speeding or simply rear-ending another car at a traffic light account for the vast majority of accidents – certainly more than a vehicle malfunction. So if computers were driving cars rather than accident-prone, distracted-driving humans would we see a drastic reduction in auto accidents? If drivers aren’t making mistakes and causing wrecks, why would they need auto insurance?

There’s a chance companies would establish rates based more on the type of car you’re driving rather than your driving record and accident history. Auto insurance companies already take into consideration the make and model of your car as well as its age when setting vehicle insurance rates. Check out the 10 least expensive cars to insure in 2016 for details on which models are cheap to insure.

Another idea is to have vehicle manufacturers bear the liability. If an accident is the result of a computer error, then the manufacturer that installed the computer would be at fault. It would be the same if the air bag or brakes failed as a result of manufacturer negligence.

Additional driver safety features such as automatic braking and lane correction, are becoming key features of new cars – which means the presence of autonomous vehicles available on car lots is just around the corner.

There’s no doubt self-driving cars will shake up the insurance industry. States could change insurance requirements and fewer people may need full coverage. It will most likely cause auto insurers to revisit plan structure and overall pricing. Even people who opt to keep driving their car themselves would benefit from lower premiums and different insurance plan options.

Plus, these smart and connected vehicles are capable of capturing a lot more information about driver habits. Think of it as a sort of black box found in airplanes. Computers in cars could record the seconds leading up to a crash to more accurately determine who is at fault. This also means that insurance companies have more information and could offer the safest drivers even better rates.

For now, the concept of self-driving cars bringing an end to auto insurance remains to be seen, but as quickly as the technology is developing, it’s going to require some quick thinking on the part of auto insurers. The good news is that self-driving vehicles could make the roads and highways much safer and lead to more options when it comes to selecting auto insurance.