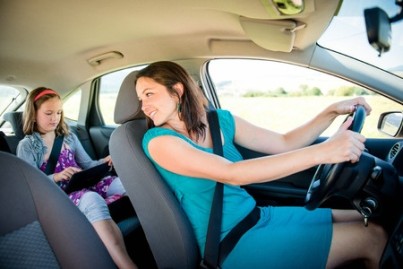 We put together a list of behind-the-wheel behaviors that could put you and your family at risk. None of them are bad behaviors. They are simply risky behaviors if your vehicle is in motion. Ready for this? Here we go . . .

Playing referee to back-seat arguments: We’ve all been there, right? We’re driving down the freeway and a fight breaks out in the back seat. Resist the temptation to turn around and play referee. It could create a bigger problem if something happens in the lanes ahead of you. The same goes for smaller children. Avoid turning around to check on a fussy child or reach for a fallen toy. Driver turnarounds are causing a growing number of serious car accidents.

Messing with music. Changing radio stations, adjusting stereo volume and even putting in a CD while you’re driving can slow your ability to respond in time to avert a car accident. In-dash technology such as GPS also can be a big distraction while driving. Pre-programmed radio stations and buttons on the steering wheel can reduce distraction. If you have a passenger, designate him or her as DJ of the drive.

Eating and drinking. A rising number of accidents are being attributed to eating, drinking and smoking while driving. Hot coffee is causing issues, particularly when sipped without a lid. And messy foods, like hamburgers, are causing collisions when their toppings tumble into a driver’s lap. Other distractions include makeup for women and, gasp, shaving for men.

Rubbernecking. OK, we’re all guilty of slowing down to check out a car accident or post-wreck cleanup. But too often the act of ‘rubbernecking’ can cause a driver to be in an accident themselves. Quick stops, lane changes and driver inattention create the perfect recipe for collision.

When it comes to driving, avoid the temptation to take your eyes off the road. Although multi-tasking may help you elsewhere, we recommend a single-minded approach to reaching your destination in safety. Drive safe! Know that we care about you and your family.